It is believed that the Toronto graffiti movement started in the late 80s. One blogger remarked that pieces on Toronto buildings, walls and overpasses embrace the culture of New York City and what it contributed to Toronto’s graffiti scene; however, there are some who believe that Toronto graffiti has a unique flavor to its work because it often represents various cultures. 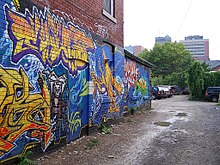 Graffiti in a Toronto alley from 2005.

There are several reasons why Toronto has such a rich history of graffiti: the city has a lot of controversy over graffiti, the city has many visible spots for artists to show their work (such as graffiti alley), as well as willing artists that challenge the city. Artists believe Toronto is the perfect size for the art to begin a discussion on matters, spark conversation and set roots for a new generation of graffiti artists The schism created by these artists is the reason why many believe Toronto’s graffiti scene is so dynamic and influential in its circles.In earlier years, many works were original and told an important story from the artists’ point of view Many still hold themes of love and family, tell stories of their lives, or use graffiti to share with the city the artists’ never-happening dream.